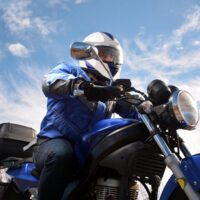 While riding a motorcycle can be a lot of fun in the Florida sun, it can also be scary and dangerous. Motorcycles are a lot smaller than other vehicles, particularly dump trucks.

A motorcycle rider was recently killed in a crash involving a dump truck in Ocala. The fatal accident occurred on the morning of June 6 at South Pine Avenue and Southwest 17th Street.

The crash is still under investigation. The dump truck had surveillance video inside it and the Ocala Police Department is reviewing it as well as the status of the traffic light and which vehicle had the right of way. The accident blocked traffic for several hours.

Whether a motorcycle accident involves many vehicles or no other vehicles, the damage can be severe. This is especially true when large trucks such as semi trucks and dump trucks are involved.

But why do dump trucks collide with motorcycles? This seems like a common type of crash and it’s mainly because of one reason: motorcycles are small and hard to see. When a truck changes lanes, there are often huge blind spots involved, which makes it difficult for the truck driver to see the motorcycle.

There are other possible factors. Truck driver fatigue and intoxication are also common. Truck drivers often work long hours and can get extremely tired later on in the night, causing them to fall asleep behind the wheel. Intoxication is also prevalent, with many drivers choosing to get behind the wheel after consuming alcohol. Alcohol greatly impacts judgment and slows down reaction times, making it harder to avoid an accident.

Another issue is speed. Trucks often go above the speed limit in order to get to their destination in a timely manner. However, these vehicles cannot slow down quickly. So if there is a hazard up ahead or a slowed-down motorcycle, they will likely hit it, causing serious injuries and even death.

What this means is that as a motorcyclist, you have to always be alert. Even if you are the safest motorcycle rider around, you cannot control the actions of other motorists. They can engage in unsafe driving habits, such as running stop signs and speeding. These actions can affect you, causing deadly crashes.

Unfortunately, motorcycles can be very dangerous. As seen in this case, they can cause serious and even fatal accidents.

The Florida motorcycle accident attorneys at Meldon Law can provide you with the help you need after such a horrific accident. We’ll assist you in protecting your legal rights. To schedule a free consultation with our office, fill out the online form or call (800) 373-8000. We have three offices to serve you: Gainesville, Ocala, and Fort Lauderdale.